Chinese New Year – Everything You Need to Know

Dating back more than 4,000 years, Chinese New Year is now celebrated all around the world. Here is everything you need to know about this traditional Chinese festival.

A little bit of history…

Although the exact beginning of the New Year celebrations in China is unclear, it is widely believed that it originated during the Shang Dynasty (17th-11th century BC).

According to centuries-old legends, the festival used to be observed to fight off the evil monster ‘Nian’ (‘Year’) who preyed on villagers. The monster was afraid of loud noises and the colour red, so the villagers decorated their houses in red and set off firecrackers to ward off the monster. And so the festival was born…

Also known as the Spring Festival, Chinese New Year is marked by the lunar calendar, so the date changes from year to year. This year it falls on Monday 8th February. Festivities usually start before the New Year’s Eve and continue through to the Lantern Festival on the 15th day of the New Year.

Each Chinese New Year is assigned one of the twelve animals which appear in the Chinese Zodiac. This year it’s the year of the Monkey, which is the ninth animal in the Zodiac cycle.

If you’re born in a year of the Monkey, you’re characterised as a clever, mischievous, curious and quick-witted. Sad to say though, this is also believed to be one of the most unlucky years in the Chinese calendar. But don’t worry; there are still some lucky attributes associated with the Monkey, such as the numbers 1, 7 and 8, and the colours white, blue and gold.

Everyone is assigned a Zodiac depending on the year they were born, so make sure you find out your own Zodiac personality. 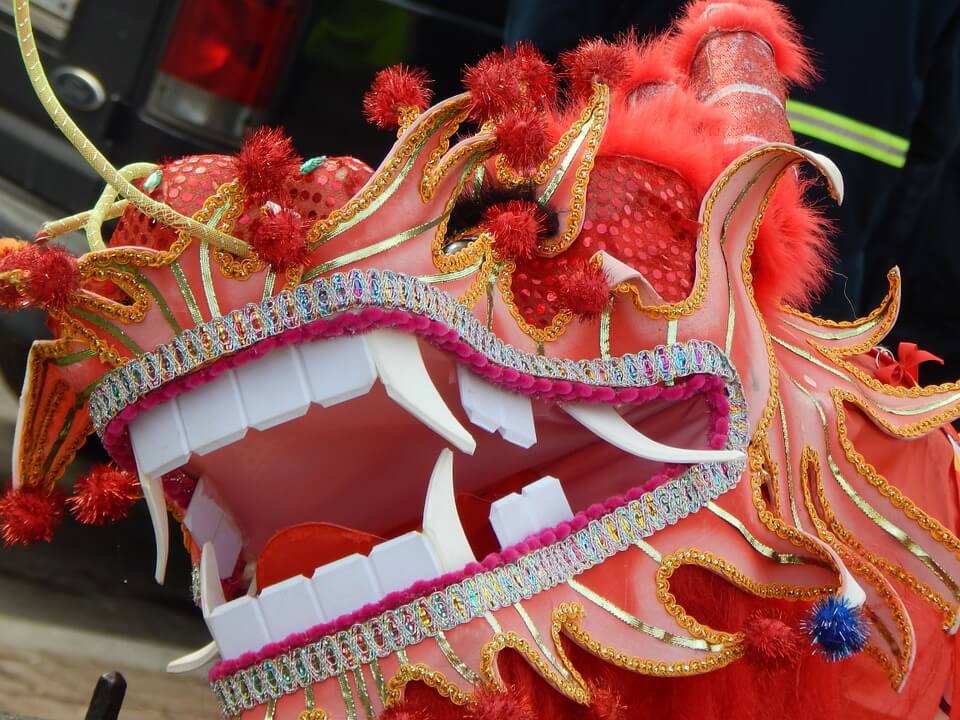 Chinese New Year remains one of the grandest and most important annual festivals for Chinese people. It’s a time when whole families reunite to honour heavenly deities and ancestors.

Many of the traditional customs are still honoured, including the giving of red envelopes with money inside to wish friends and family happiness, luck and prosperity in the New Year. With sweeping avoided on the first day of the New Year, for fear that you will sweep away your wealth, many Chinese people will carry out a complete clean of their house a few days before the New Year, to remove the old and welcome the new.

After cleaning, it is customary to decorate your house in red lanterns, papercutting, door gods and upside down fu (a good luck character).

Right after midnight on the New Year’s Eve, fireworks will be let off to drive away the evil from China and to celebrate the coming of the New Year. It is believed that the person who launches the first firework of the New Year will obtain good luck.

And of course, food plays an important role in celebrating Chinese New Year. Huge feasts are enjoyed throughout the festival period, with the New Year’s Eve dinner often the most important dinner, as this is when the family reunites.

Traditional dishes served during Chinese New Year include fish and the classic Chinese dumpling. Together these dishes mean ‘prosperous’ and eating them is meant to bring you wealth, prosperity and a bountiful harvest!

Other customary dishes served might include spring roles, niangao (which are sticky rice cakes) and tangyuan (which are sweet rice balls). And if you wanted to wish your guests long life, serve them longevity noodles. Much longer than normal noodles, they are usually fried or served in a noodle broth, and are symbolic of the eater’s life.

For more information on Chinese New Year and its customs and taboos, click here.