Ah, Wimbledon, how we Brits love you

Ah, Wimbledon, how we Brits love you. While tennis may not be our nation’s most beloved sport, Wimbledon nonetheless holds a special place in our hearts and is a British institution. For many of us, Wimbledon isn’t just about the sport, it’s so much more. It’s the food, style and overall atmosphere that we love too. So without further ado, we give you the 6 most iconic foods and drinks that you cannot possibly think of enjoying Wimbledon without!

Strawberries and cream have been served as a dessert at Wimbledon ever since it started back in 1877! The main reason for this was most likely due to the season that strawberries were grown, they were perfectly ripe at the same time as Wimbledon. What’s more, they were considered a delicacy and were highly fashionable during the Victorian period. Today, strawberries and cream are the number one selling food at Wimbledon with almost 192,000 servings being sold in 2019!

Strawberries and cream were already established as a delicious combination long before the first Wimbledon though – apparently they were first served together in 1509 at a banquet held for King Henry VIII!  The strawberries sold at Wimbledon are all locally sourced from Hugh Lowe Farms in Kent. The family-run farm has been growing strawberries since 1893 and supplying Wimbledon for over 25 years! 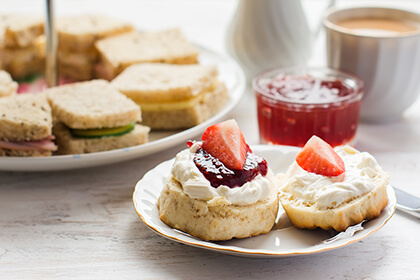 Another classically British dessert (which goes great with the aforementioned strawberries and cream) that is served at Wimbledon, are scones. Scones are another British classic that has been being enjoyed for hundreds of years. In fact, according to the Oxford English Dictionary, the word scones has been used since 1513! Hell, if it ain’t broke…

Scones are a traditional part of an afternoon tea (or cream tea to some). As well as being served with strawberries and cream, they are also popularly enjoyed with butter and jam. Scones can come as the classic plain Devonshire scone or with sultanas inside. There are also cheese scones and other interesting options out there for the more adventurous – but we prefer our scones classically sweet! 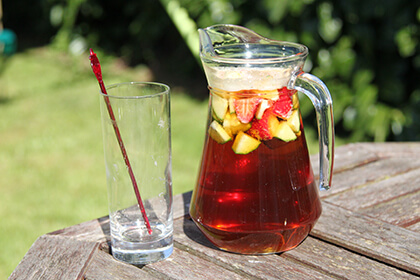 The first Pimm’s bar opened at Wimbledon back in 1971 and it has proven to be incredibly popular since. In fact, at the latest Wimbledon 276,291 glasses of Pimm’s were sold – now that’s a lot of booze!

The original, and most popular, Pimm’s No.1 is a gin-based drink infused with herbs, caramelised orange and spices. Pimm’s is best served with lemonade, fruit (usually strawberries and orange), mint, and cucumber. This deliciously decadent drink is the perfect treat for a hot summer’s day watching Wimbledon – whether you’re there or watching from home! 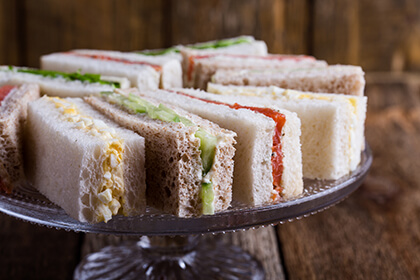 While the concept of a humble sandwich may not immediately scream Wimbledon to you. When you think of it within the concept of an afternoon tea or picnic (both of which are staples of Wimbledon) you realise that it is definitely a must-have addition to your Wimbledon diet. Classic sandwich fillings like cheese and pickle, cream cheese and cucumber, smoked salmon, or egg mayo and cress, on Warburtons white bread are quintessential sandwich choices for your Wimbledon picnic.

If, like us, you just can’t resist having a packet of crisps with your sarnie, why not try the tasty Thai Sweet Chilli Sensations or Tyrrells Sea Salt & Pepper crisps on the side?

Clearly, Wimbledon goers also feel that a sandwich is the perfect bite to eat while watching the games, as 110,000 sandwiches and baguettes were sold at Wimbledon in 2019! 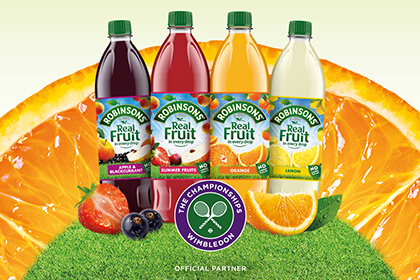 Did you know Robinsons Squash was actually created at Wimbledon? Their Lemon and Barley Water was invented during the Championships in 1935 to quench the thirst of the players. Since then, Robinson’s have gone on to produce a number of delicious squashes (our personal favourites for quenching our thirst in the summer are their Summer Fruits or Apple and Pear squashes). Since this invention, Robinson’s has remained the official soft drink of Wimbledon.

As well as being loved by Wimbledon fans, her Majesty Queen Elizabeth II is also a lover of the soft drink – Robinsons have had a Royal Warrant since 1955.

We’d be remiss not to mention this one as, much like Pimms, a glass of bubbly is another alcoholic beverage that is synonymous with Wimbledon. Lanson is the official Wimbledon providers of champagne and has been since the 1970s.

To spice up your champers and really get more Wimbledon fever per sip, why not try adding a splash of Robinsons squash? We personally love the addition of their passionfruit and mango or lemon and lime mixtures. Plus, they come in handy mini sizes so you can pop it in your pocket and add a dash to your Champagne when you’re there!