How to Make the Perfect Yorkshire Pudding

The humble Yorkshire Pudding has been a staple part of British Roast Dinners for hundreds of years. To those outside ole blighty, the idea of a savoury ‘pudding’ served with meat and gravy might seem insane. But, clearly, they haven’t tried this deliciously light, fluffy delicacy! So, we wanted to dedicate an entire article to the classic Yorkshire Pudding, and share our recipe for the perfect pud to honour this beautifully British classic!

The History Behind It

Believe it or not, the Yorkshire Pudding has been around since the 1700s! The idea of making the pudding came about as a way to catch the dripping from your meat while cooking. The Yorkshire would be placed underneath the meat in the fire and would catch all of the fatty juices as they dripped down. The dripping-filled puddings would then be served with gravy as a first course, followed by your meat and veg for the main meal. The idea behind this was to fill people up on the cheaper item before they tucked into the expensive meat! Poorer families would skip the meat altogether and just enjoy a Yorkshire with gravy on its own.

Ways To Enjoy Your Yorkshire Pudding 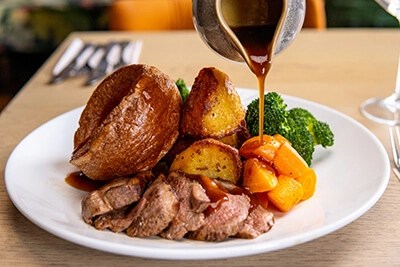 Although purists may say that a Yorkshire Pudding belongs with roast beef only, it has become so beloved that it is often considered a necessity with any Roast Dinner. However, the humble pud isn’t a one-trick pony – it can be enjoyed in other meals too! Arguably, the second most popular choice in the UK for a Yorkshire Pudding based meal is the classic Toad in the Hole. Toad in the Hole is, quite simply, sausages cooked inside of your Yorkshire pud and topped with gravy – easy and satisfying! 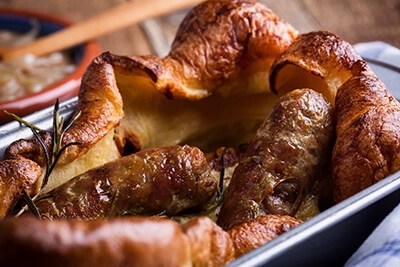 Why not go one step further and turn your toad in the hole into a spin-off on the iconic Full English Breakfast by adding your favourite ingredients to the dish. Eggs, bacon, mushrooms, and tomatoes work particularly well. However, a Full English wouldn’t be complete without baked beans! Serve them on the side, or poured on top to finish your Full English Yorkshire off in style!

Some wonderful genius also came up with the idea of creating a giant Yorkshire Pudding which acts as a kind of bowl to serve your roast inside and fill with gravy. We would personally like to salute whoever thought this one up as it is pure heaven! Not to be outdone, another entrepreneur had the bright idea to create a Roast Dinner Wrap. This consists of a giant Yorkshire, as the wrap, filled with your meat, veg, and gravy. A roast dinner on the go? Don’t mind if we do!

Some other interesting ideas we have heard to elevate your pud are things such as a Yorkshire stuffed with baked camembert and cranberry sauce, Yorkshire Pud smothered in curry sauce or your leftover Indian takeaway, and even a Yorkshire Pudding pizza – Britain’s answer to the Chicago deep dish!

(Makes approximately 8 large or 24 small puds depending on your baking tray!) 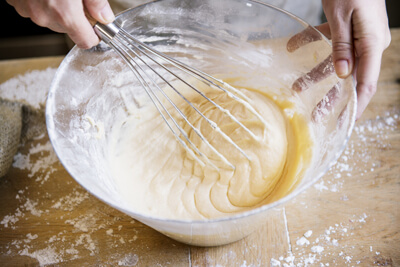